Have your say, make your voice heard – the 2018 National Rural Crime Survey 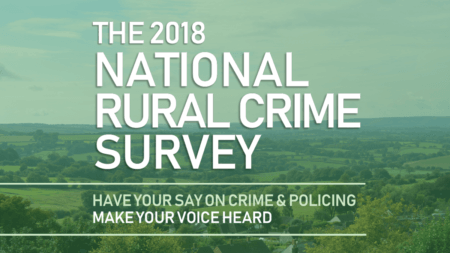 It’s three years since the last National Rural Crime Survey revealed the huge cost of crime to rural communities – both financial, at £800 million per year, and fear, with chronic under-reporting, anger and frustration at the police and government.

The National Rural Crime Network produced a series of recommendations and, in many areas, the police took steps to improve matters. So, now, we want to know what’s changed.

Do you think rural crime has gone up or down in Warwickshire? Do you feel safer? What’s your view of the police in your community?

In short, we want to know the true picture of crime and anti-social behaviour in rural communities across Warwickshire – and the impact it has where you live or work.

Questions cover a range of issues – from whether you report crimes that you or your business suffer, to the impact crime and anti-social behaviour has on you and your area, and whether you believe enough is done to catch those who carry out the offences.

It’s all about making sure the voice of rural communities is heard by those who can make a difference to where we live and work – from the Police to Government.

The survey is now available at www.nationalruralcrimenetwork.net/survey and is open for submissions until Sunday 10 June.

Warwickshire Police and Crime Commissioner Philip Seccombe said:  “Warwickshire is a predominantly rural county and ensuring the police and other agencies work effectively together to tackle rural crime has been one of my key priorities. There was a good response the last time the survey was carried out and I’m keen to encourage local people to take part and give their views on what has changed since 2015, what has improved and what the key challenges are that still remain.

“I hope people will take a few minutes to complete our survey as it help us to understand what more government, police forces and other organisations can do to support our rural areas.”

The survey last took place in 2015. Then, 13,000 responded to give their impressions of crime and anti-social behaviour and revealed the financial cost of rural crime was significant – around £800 million every year.

One of this year’s focuses as we rerun the research is whether rural crime continues to be underreported. Three years ago, one in four said they didn’t report the last crime they’d been a victim of because they didn’t see the point.

It’s being carried out by the National Rural Crime Network. The organisation brings together Police and Crime Commissioners, police forces and organisations that play a key role in rural communities – like the Country Land and Business Association, the National Farmers Union, Neighbourhood Watch, Crimestoppers, Historic England and the Countryside Alliance.

The Network’s Chair is Julia Mulligan. She said: “The aim of the National Rural Crime Network is to see greater recognition and understanding of the problems and impact of crime in rural communities so more can be done to help them be safe – and feel safe. In order to achieve that, we need to know the true picture of crime and anti-social behaviour that residents and businesses face.

“The 2015 findings uncovered some difficult truths for all those involved in protecting rural areas and now is the right time to see whether lessons have been learnt, whether people are more willing to report the crime they are victims of and if they do indeed feel safer.”

After the 2015 report, police forces across England and Wales made efforts to improve the way they dealt with crime that took place in rural areas. A mix of measures were adopted, including from 13 forces who now have dedicated rural crime teams, six forces who have a dedicated rural officer and two forces who introduced cross-force collaboration. The 2018 Survey will assess the impact these have had in an attempt to further showcase and roll-out best practice.

The results will also feed into the National Police Chiefs’ Council’s Rural Affairs National Strategy for 2018-2021 which is due to be launched later this year.