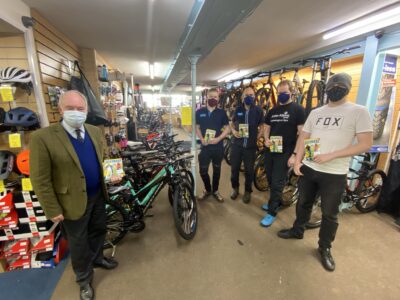 The magazines are part of a Vulnerable Road User Education Campaign following a bid from First Car to the Commissioner’s fund and are aimed at helping Warwickshire’s older drivers, new motorcyclists and cyclists to stay safe when using the roads.

Almost 20,000 Ultimate Guide to Cycling magazines have just been distributed to 32 schools, four colleges, 31 leisure centres and cycle shops around the county. Five hundred of these will also be used by Warwickshire Police engaging with cyclists during road safety operations.

The magazine provides students who cycle or would like to become cyclists with information and advice to help keep them safe on the roads and encourage healthy travel choices.  Advice includes buying a bike, how to improve your visibility and safety including road skills such as road positioning, effectively indicating intentions, obeying traffic signals and reading the road to help riders stay safe.

Also aimed at young people, over 6,000 copies of First Bike magazine have been distributed to 32 schools, 4 colleges and 13 motorcycle retailers across Warwickshire during September.

First Bike is aimed at those who either currently ride a ‘Powered Two Wheeler’ or who are looking towards completing their Compulsory Basic Training. The magazine covers on-road training, theory and hazard perceptions skills, essential bike maintenance, insurance and the all-important personal protective equipment such as Kevlar jeans, gloves and proper motorcycle shoes/boots, as well as vulnerability and risk taking.

Whilst many mature drivers have decades of experience making them some of the safest drivers on the road, they may be looking for information and advice that will help them drive safely for longer and 14,000 Drive On magazines for older drivers have been distributed to a mix of 75 doctor surgeries and opticians across Warwickshire to provide just that. DriveOn magazine also provides suggestions for handling the transition away from driving and onto other means of mobility, at the appropriate time. Stopping driving doesn’t have to mean losing independence and it can turn out to be cheaper and easier than running your own car.

Warwickshire Police and Crime Commissioner Philip Seccombe said: “We know that cyclists, motorcyclists and older drivers are over-represented in collision statistics and we believe that better education targeted at each road user group can make a big difference. This campaign aims to empower vulnerable road users by giving them the knowledge required to maximise their safety on the roads.  We are also encouraging sustainable transport alternatives and supporting road users in making good travel choices.”

James Evans, Founder of First Car who produced the magazines said: “We are delighted that Mr Seccombe has decided to fund these educational magazines for vulnerable road users, particularly at a time when many older road users are experiencing the effects of skill-fade due to lockdown and the number of people choosing to travel on two wheels is rapidly increasing because of social distancing.”

Although 40,000 magazines have been distributed, we know from past experience that 42% of magazines are passed on to a friend or relative, while 33% of copies are retained by the reader. Less than 5% are thrown away or recycled by the first recipient. We hope this will mean that the magazines will continue in circulation for some time to maximise the number of people who can benefit from the information they contain.