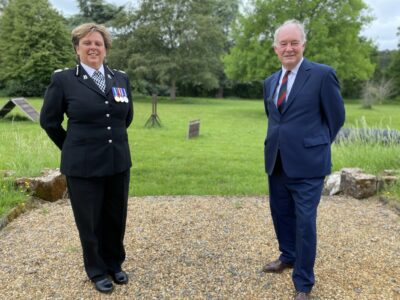 Philip Seccombe announced last month that the force’s current Temporary Deputy Chief Constable was his preferred pick for the top role, taking over from outgoing Chief Constable Martin Jelley QPM when he retires at the end of June.

The Commissioner’s decision was subject to confirmation by the Warwickshire Police and Crime Panel, which held a hearing at Warwick Shire Hall on Friday (June 11) in order to consider the appointment and hear from the preferred candidate for themselves.

The meeting, which was livestreamed so the public could also watch, allowed the members of the panel to question T/DCC Tedds and also to receive a report from the Commissioner outlining the interview and selection process in full.

The Panel, made up of elected and independent members from across Warwickshire, had the power to veto the appointment but voted their approval of the Commissioner’s nomination. Writing to the Commissioner following the meeting, the Panel chair, Councillor David Reilly, said members were confident that T/DCC Tedds “possessed the competencies, behaviours and experience required for the role” and “commended her for the post without reservation”.

Warwickshire Police and Crime Commissioner Philip Seccombe said: “I am pleased that the Panel agrees with me that Debbie Tedds is absolutely the right person to lead Warwickshire Police when our current Chief Constable Martin Jelley retires at the end of the month. Debbie is Warwickshire through-and-through and has the benefit of having served at all levels within her home force over a distinguished policing career. She is both well-known and well-respected locally, regionally and nationally and that can only serve the force well.

“Her commitment to Warwickshire communities is second-to-none and she will take over the force at an exciting time. The next few years will see Warwickshire Police continue to grow and develop and I am delighted that we will have an outstanding leader in charge who has already been heavily involved with the transformation programme and can lead it forward immediately.

“That continuity will allow a seamless transition when she takes charge and will help provide the workforce of Warwickshire Police with added stability, allowing them to fully focus on serving the people of Warwickshire.

“It also gives me great pleasure to be able to appoint the county’s first ever female Chief Constable and so I am delighted to have received the full support of the Panel to do so.”

Temporary Deputy Chief Constable Debbie Tedds said: “Having served as an officer at every rank within the force and across the county for more than 30 years, to be afforded the opportunity to be the first female Chief Constable in our 164-year history is an absolute honour and privilege.

“From next month I will now have the opportunity of a lifetime to lead an incredible force to provide the very highest standards of care and protection to the communities of Warwickshire.  I will do this in the full knowledge that Warwickshire is equipped with highly skilled officers, staff and volunteers to whom I am dedicated to supporting.

“I am extremely grateful to both our current Police and Crime Commissioner and the Police and Crime Panel members for the trust and confidence they have shown by offering me this opportunity.

“I very much look forward to building on the fantastic local partnership relationships we have in this county but most of all I will be seeking to engage with as many members of our communities as possible, to listen and understand how the force can continue to grow and respond to people’s needs.

“I passionately care about Warwickshire and its people and I’m excited to continue to develop our force to ensure its services are of the upmost quality, fit for now and the future, putting the care of our people at the heart of everything we do.”

Debbie Tedds grew up in Leamington Spa and joined Warwickshire Police in March 1989. She served across Warwickshire in a variety of roles and departments as a Constable, predominantly within the Investigations departments and was promoted to Detective Sergeant in 2002.

Debbie progressed through the ranks, being the first female Warwickshire officer to achieve the rank of Detective Inspector working within Reactive CID, Proactive CID, Intelligence and setting up the Protecting Vulnerable Persons unit and introducing Multi-Agency Risk Assessment Conferences into Warwickshire before being promoted to Superintendent in 2009 to head up the then Judicial Services Department.

Debbie was seconded to Her Majesty’s Inspectorate for Constabulary in 2011 as a Specialist Staff Officer leading on Vulnerability and in particularly Child Protection. Following this role she returned to Warwickshire Police and was appointed as the Policing Area Commander for South Warwickshire. She was then promoted in 2015 as Chief Superintendent and performed roles across the former alliance with West Mercia Police, heading up the Assurance and Service Improvement function and then as Head of Crime and Operations.

She was successful at the Senior Police National Assessment Centre in November 2018 and graduated from the Strategic Command Course as the first Warwickshire female officer in March 2019.

Debbie was appointed as Assistant Chief Constable for Protective Services and Professional Services May 2019 whilst also leading the implementation of the force’s Evolve Change programme, transitioning services out of the strategic alliance. She is the force Firearms Portfolio holder and regional Victims and Witnesses Chief Officer lead.

Earlier this year she was appointed as the force’s Temporary Deputy Chief Constable and has recently taken over the NPCC Vetting Portfolio.

She is incredibly proud and honoured to serve as a Warwickshire officer, in the county she was born and grew up in, which is most definitely her home.