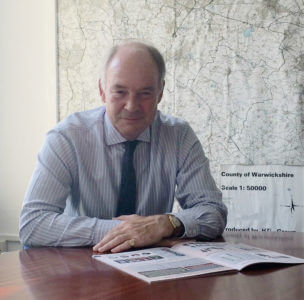 A new strategy to provide a framework for better co-ordination between the agencies involved with tackling unauthorised traveller encampments in Warwickshire is to be created, following a county round-table meeting chaired by Police and Crime Commissioner Philip Seccombe.

The meeting at Nuneaton Town Hall today (Friday 13 January) involved all of the agencies with powers to deal with unauthorised traveller encampments on public land, including the police, county, district and borough councils.

Also in attendance were county MPs Marcus Jones and Craig Tracey, along with representatives of other county Members of Parliament, parish councils, Coventry City Council and the Office of the West Midlands Police and Crime Commissioner.

The group examined in detail the current legislative powers available to the agencies, as well as discussing recent case studies.  Examples of alternative legal approaches, such as the use of injunctions against individuals, were also considered, drawing on experiences from elsewhere in the country.

Warwickshire Police and Crime Commissioner Philip Seccombe said: “I know that the issues that unauthorised encampments pose for residents and local business can be severe and there is a perception that more should be done or that efforts are not being made quickly enough to move on encampments when they arise.

“It’s something that people raise frequently with councillors, MPs and my office, so I was keen to broker a meeting to discuss the issues on a county-wide basis.  This was the first time that all of the agencies who are involved in dealing with unauthorised encampments on public land have gathered in one place to share their experiences, say what works well, what could be improved and also to look at what is being done elsewhere.

“We heard detailed explanations of the powers that are available to police and local authorities, as well as some of the difficulties that have been experienced in using them.  It was however clear that there is already good co-operation between the agencies when they deal with the individual encampments but there is the potential to ensure that the broader county-wide picture is looked at in more depth, so that there is better sharing of information and learning from each incident.

“We have resolved to go away and look at what we are individually doing and create a strategy to ensure that when unauthorised traveller encampments occur, we have a co-ordinated response that looks to find the best solution within the mix of the powers available, in order to solve the problem in the quickest possible time for residents and local businesses.

“Warwickshire’s position in the centre of the country with good transport links means that we are unlikely to ever prevent unauthorised encampments altogether, but by having continued learning from each incident we ultimately hope to ensure that as much as possible we can minimise the disruption these encampments cause as well as reducing the number that occur.

“My office will continue to work with all of the agencies involved and my aim is to have a county-wide strategy in place and delivering practical results by the middle of the year.”

Mr Seccombe has also attended a summit meeting on unauthorised traveller encampments held by the West Midlands Police and Crime Commissioner on February 10.  Notes of this meeting can be found here.