Consultation on the policing budget launches 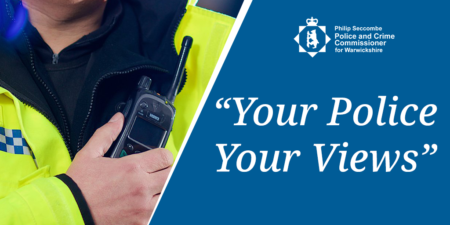 Warwickshire’s Police and Crime Commissioner Philip Seccombe has launched his annual consultation on the policing budget, asking the public for their feedback on how best to meet the challenges facing police in the county.

Mr Seccombe wants to hear views on where the public feels some of the main priorities for spending should be placed, as he sets the finances for Warwickshire Police for 2022/23.

The consultation comes as the Government has confirmed funding is in place to support the continued recruitment of new police officers, which will see Warwickshire Police reach its highest ever total of 1,100 by the end of 2022.

Aside from the core central grant from Government, just under half of the police budget is made up from Council Tax contributions, through the Police Precept.

In its settlement announcement, the Government gave Police and Crime Commissioners the flexibility to increase the Police Precept by up to £10 a year on an average Band D property – around 83 pence per month. The majority of homes across the county would pay proportionately less as they fall in lower bands, while those in higher bands would pay proportionately more. This equates to a percentage increase of 3.95% and would raise around £500,000 more than a standstill budget.

Explaining the consultation, Mr Seccombe said: “This year we have all been faced with rising costs, with the price of fuel, utilities and a wide range of our everyday purchases now much higher than in previous years, as the impact of inflation and other factors starts to take hold.

“The same is true in policing and across the public sector as a whole. The funding required to sustain our officer numbers and to buy the goods and services necessary to support the front line is continuing to increase.

“This all adds up to considerable cost pressures for Warwickshire Police. The budget I set next year must provide for increases in pay and National Insurance, as well as meeting the need to invest in the services such as IT, human resources, finance systems and the vehicles and buildings which will support our record 1,100 officers by the end of 2022.

“I know that these are not easy financial times for many households and that’s why it’s important I gather the views of local people and council tax payers as to whether an increase in the precept is justified and if so, what priorities it should be spent on.

“My aim is to seek a fair outcome which keeps taxation levels as low as possible while also protecting local services.  However to do this, I really need people’s input so I can best understand where that balance may lie.

“It will only take a small amount of time to complete the survey and your views will help to shape my draft budget, which I will set out in January.  I would encourage everyone who lives, works or studies in Warwickshire to have their say before the consultation closes on January 17.”

You can take the ‘Your Police, Your Views’ budget consultation by clicking the button below.