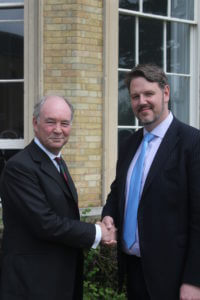 The Police and Crime Commissioners for Warwickshire and West Mercia have approved a £5.5 million capital investment in new technology, which will deliver a better service to local communities by enabling the police to do their jobs more effectively.

The new systems, from Saab, are a key part of a major project to create a new state of the art, Operations Communications Centre (OCC) which will handle all emergency and non emergency calls to both forces.

The technology will mean contact handlers can process information faster, make better use of resources and provide a better response to incidents first time. Officers on the ground will be able to spend more time with the public and find out more about incidents before arriving at the scene, enabling them to make better decisions. It will also open up the potential for new channels to report incidents, improving the way in which the forces interact with the public.

Warwickshire Police and Crime Commissioner Philip Seccombe said: “People in Warwickshire quite rightly have the expectation that when they contact the police they will be dealt with efficiently and effectively, with the most appropriate police resources used to meet their call for assistance. The signing of the Saab contract represents a very big step forward in achieving this and forms a major part of a larger project which sees the establishment of a new Operations Communications Centre at Neville House in Warwick and at Hindlip in Worcestershire. State-of-the-art technology will ensure better co-ordination of resources and an improved level of service for the public.”

West Mercia Police and Crime Commissioner, John Campion said “I pledged to create a more secure, reassured and reformed West Mercia. This technology represents a significant step forward on each of those fronts. I also pledged to back the force and give our officers the tools to do their jobs better. This will enable them to serve our communities in a much more effective, efficient way.”

Amanda Blakeman, Assistant Chief Constable Local Policing for Warwickshire Police and West Mercia Police said: “Investing in this new Saab command and control system is an exciting move towards us achieving our vision for a completely modernised police force. This technology will bring major improvements to our ability to respond to incidents, giving faster access to all the existing information on our systems when a call comes in. It will also give officers on the street access to more information at their fingertips allowing them to make the better decisions on the ground.”