Warwickshire’s Police and Crime Commissioner Philip Seccombe has welcomed the unanimous backing of the county’s Police & Crime Panel members who have today (Monday 4 February) supported his decision to increase the police precept by an extra £2 per month (for an average band D property).

It follows an extensive public consultation by the Commissioner which found broad backing for the proposals which will allow the Chief Constable to recruit an additional 100 extra employees, comprising 85 police officers, 5 police community support officers and 10 civilian crime investigators.

More than 2,400 Warwickshire residents responded to the survey, with over 72% giving their backing to a rise of £2 per month – with three quarters of these indicating they would have been willing to support an even greater raise, if it had been offered. 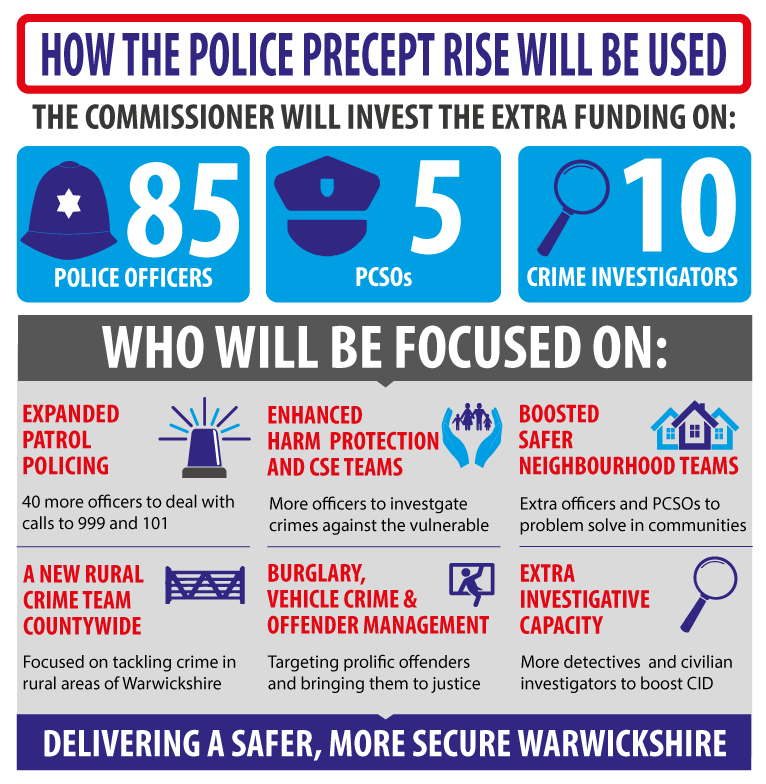 Warwickshire Police and Crime Commissioner Philip Seccombe said: “I am pleased to receive the backing of Panel members and the public for this increase to the police element of Council Tax. The feedback from the public was very clear: people want to see more visible policing in the communities where they live and they want to see an improved response from the police when they call them.

“No tax rise is ever going to be universally popular and I have listened carefully to the 1,600 individual comments received through the consultation. The majority of people in the county will in fact pay less than £2 extra a month and the clear indication from those who gave their feedback is that they are willing to pay a little extra if that means additional boots on the ground.

“The budget I am setting will allow for the recruitment of substantial numbers of officers over the next 12-18 months, bolstered by extra police community support officers and crime investigators who can provide additional support and expertise where needed to bring criminals to justice.

“This will take time to implement fully but I am confident we can build on the momentum of the current Warwickshire Police recruitment campaign, which is set to deliver by the early summer the additional 50 officers I funded in this year’s precept.

“Taken together, these increases will mean that over the next few years the numbers of police officer posts in Warwickshire will be heading back up to just under 1,000 and I am sure that is something that will be warmly welcomed by the public.”

The additional officers funded in 2019/20 will be used in a variety of ways:-

Martin Jelley, Chief Constable of Warwickshire Police said:  “I am delighted that the public of Warwickshire and the Police and Crime Panel have supported this proposed increase in funding for the force. This is extremely positive news for Warwickshire and will enable the additional growth of 100 officers and staff to protect people from harm across our county. This decision truly recognises the pressures and demands currently faced by policing and on behalf of our police force I would like to thank the public for their continued support.”

Council Tax Band – what will I pay?

As a result of the budget proposals being accepted by the Police and Crime Panel, households will pay the following charge for policing services in their Council Tax in 2019/20:

*Council Tax bands are calculated to four decimal places but are presented here to two, which may mean they vary by plus/minus 0.01p.