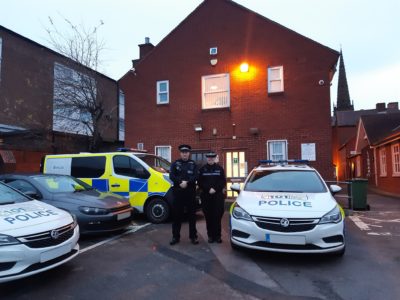 Patrol police officers with the police vehicles at Coleshill

Patrol officers are to be based in Coleshill again, as part of Warwickshire Police’s commitment to serving its most rural locations.

Chief Inspector Lee Kemp said: “This is excellent news for Coleshill and the local area. As a force we take rural crime extremely seriously and in September we launched our first Rural Crime Team, which is dedicated to reducing rural crime across the county.

“We hope that by using Coleshill again as an active patrol base reinforces the message that crime will not be tolerated in any part of Warwickshire, including our rural communities.”

The new officers will be working out of the Coleshill base from Friday (20th December).

Warwickshire Police and Crime Commissioner Philip Seccombe said: “This was a gap over the last few years and was something that residents and businesses in the local area had raised with me and I had previously discussed with the Chief Constable. The move to bring patrol officers back to Coleshill shows that the force is listening and acting on the concerns of the community and is one of the added benefits arising from the investments I have been able to make in additional police officer posts across the past two years.

“I am absolutely delighted to see patrol policing restored and am sure that residents will be reassured to see them deploying from Coleshill once again.”