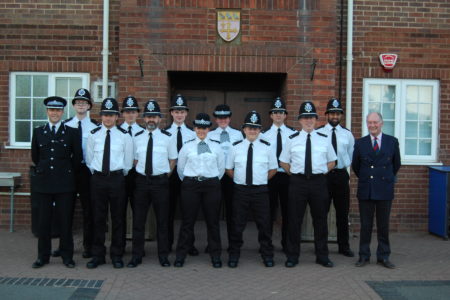 Eleven new police officers will soon be hitting the streets of Warwickshire after passing out of their initial training phase.

The new officers are the latest tranche to complete their training as part of the Commissioner’s commitment to boost policing numbers across the county. Across the summer months, further student officers will be completing their Initial Police Learning and Development programme, meaning that by the end of the year there will be 150 extra officers in Warwickshire.

The constables have successfully completed a rigorous training including everything from meticulous classroom-based law and legislation learning to practical exercises which put their knowledge and skills to the test. They also have to undergo fitness tests and academic exams, first aid courses and challenging officer personal safety training to ensure they meet the high standards needed to police our county.

Along with the support of tutor constables, the student officers will now progress their skills by starting their shifts as part of patrol policing across the county and will soon be out on the streets as operational Warwickshire Police officers.

After a 10 week tutor patrol period they will progress to patrolling independently, with regular reviews to complete a total of two year probationary period.

The new officers were congratulated on their achievement in a special passing out ceremony at Warwick School this week, attended by Assistant Chief Constable Alex Franklin-Smith and Warwickshire Police and Crime Commissioner.

“The public consistently tell me they want to see more police visibility with greater numbers of officers in place to keep them safe and that’s why I have pledged to invest heavily in frontline policing. Our recent recruitment campaign has been very successful, with a number of experienced officers transferring to Warwickshire from other forces to join the ranks alongside our newly-qualified officers.

“It means by the end of the year officer numbers will be up from around 800 to 950, which will represent one of the largest percentage increases anywhere in the country. I am confident that the public will start to see the real difference this will make and I will continue to do all I can to ensure our police force has the resources needed to keep our communities safe.”

The new officers have been funded through the increases to the portion of Council Tax which pays for policing in 2017/18 and 2018/19. In addition to recruiting 150 police officers over the two year period, the additional funding will pay for extra Police Community Support Officers, Special Constables and police staff investigators to bolster operational policing requirements.

Further passing out ceremonies are scheduled for July, August and September.