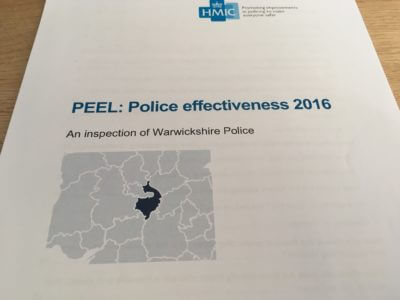 Police and Crime Commissioner Philip Seccombe has welcomed the improved findings by the police watchdog that Warwickshire Police is good at keeping people safe and reducing crime.

That’s the overall verdict from the Her Majesty’s Inspectorate of Constabulary (HMIC) Effectiveness report, which was published today.

The overall finding of ‘good’ demonstrates the progress Warwickshire Police has made in the last 12 months following the previous Police Effectiveness report. It highlights advances made with digital investigations capability; the way in which the force tackles serious and organised crime; and also found that previous concerns about how the force responds to missing and absent children and more widely to vulnerable victims have all been addressed.

The HMIC inspectors also found that Warwickshire Police has good arrangements in place to respond to national threats, including being well-prepared to respond to an attack requiring an armed response.

While today’s report does make some further recommendations for the force to address, overall HMIC said that “the public can feel confident that Warwickshire Police protects vulnerable people and supports victims.”

Warwickshire Police and Crime Commissioner Philip Seccombe said: “Ensuring that the force obtains as a minimum ‘good’ overall ratings in each main part of HMIC’s PEEL inspection programme is one of the firm pledges I made in my Police and Crime Plan. I am pleased that the progress towards this over the last 12 months has been recognised within the latest Effectiveness report. The ‘good’ rating follows on from the similar assessments in the earlier Efficiency and Legitimacy reports.

“HMIC’s findings reflect the hard work and commitment to serving local communities and protecting the vulnerable that is demonstrated by officers and police staff on a daily basis. There can be no complacency, however, and there are still areas which HMIC has identified where further improvements can be made.

“Warwickshire Police has a good track record of delivering against these recommendations and I will continue to hold the Chief Constable to account to ensure that they are acted upon in the same constructive way.

“In addition, the investments I am making in new technology and mobile working will further help to ensure that Warwickshire Police continues to move forward, delivering a better service our local communities and victims of crime.”

The full HMIC Effectiveness Report is available at: www.justiceinspectorates.gov.uk/hmic/peel-assessments/peel-2016/warwickshire/effectiveness/