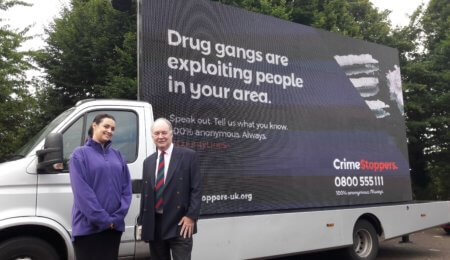 Warwickshire Police and Crime Commissioner Philip Seccombe with Emily van der Lely from Crimestoppers and the ad van at its first stop in Stratford Upon Avon.

A new campaign to raise awareness of ‘county lines’ serious and organised crime has reached Warwickshire, with the backing of the county’s Police and Crime Commissioner, Philip Seccombe.

Independent charity Crimestoppers launched the national campaign last week, with an ad van touring the country to spread the message about how organised crime groups from the big metropolitan cities are targeting more suburban and rural areas, most usually to facilitate the supply of illegal drugs.

The campaign reached Warwickshire on Monday (July 30), with the ad van visiting areas in Stratford-upon-Avon, Leamington Spa and Nuneaton during the day.

County Lines gangs often exploit children and vulnerable adults to move drugs and money. The gangs move into a rural or suburban area for a short time, taking over the home of a vulnerable person where they set up a base.

Many of those taken advantage of by these gangs have been forced to carry out criminal activity by threats, grooming and extortion and can be described as modern day slaves.

Speaking about the campaign, Emily van der Lely, Crimestoppers lead on County Lines, said: “We know that the term ‘County Lines’ might not be widely recognised, which is why we are launching this campaign and asking for your help to support us in tackling this issue.

“We need help to put a stop to this exploitation and the damage that these criminals are inflicting on our communities and those being taken advantage of.

“We are asking you to contact us anonymously and safely through our 0800 555 111 number, or via our secure online form at Crimestoppers-uk.org – both methods are 100% anonymous. Always. Together we can put a stop to this.”

Warwickshire Police and Crime Commissioner Philip Seccombe said:  “County Lines is an extremely serious form of crime, in which organised crime gangs from outside our area seek to exploit local and often vulnerable individuals here in Warwickshire, in order to sell drugs or other conduct illegal activities. This causes great harm to those involved and brings misery to communities across the county.

“Identifying, disrupting and ultimately bringing these gangs to justice is something that Warwickshire Police and its partners across the region are working extremely hard to do, but they need the help of the public to pass on information about suspicious activity.

“This is where Crimestoppers can be extremely helpful in allowing people to pass on information anonymously that they may not otherwise be able or feel willing to do.  It could be the piece of intelligence that makes all the difference to police and that’s why I’m delighted to fund Crimestoppers through my grants scheme.  It’s great to see the County Lines campaign touring the area and I hope it encourages more information to be passed on so that we re-emphasise the point that Warwickshire should not be seen as a soft-spot for criminals.”

Spot the signs and report concerns

If you recognise any of the signs listed above, you can report your concerns to police by calling 101 or contacting Crimestoppers anonymously on 0800 555 111 or through the untraceable online form at Crimestoppers-uk.org.