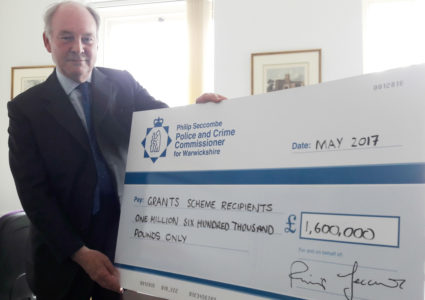 Sixty projects which help tackle crime and disorder across Warwickshire have been awarded a share of a £1.6 million fund by the county’s Police and Crime Commissioner, Philip Seccombe.

The Commissioner’s Grants Scheme is an annual award which seeks to support initiatives which will make a positive contribution to the objectives of the Police and Crime Plan.  Schemes both large and small are benefiting from this year’s round of funding, the first such award made by Mr Seccombe since he took office last year.

Applications for funding from across the county flooded in when the scheme opened for bids in November, with all successful initiatives being evaluated and scored against strict criteria to determine their eligibility and suitability before the final list was confirmed.

Smaller scale projects to benefit include Neighbourhood Watch in North Warwickshire, the Rugby Street Pastors and the Warwickshire Youth Parliament’s ‘Don’t Hate, Educate’ scheme, which aims to raise awareness of hate crime and its impact in LGBT communities.

Warwickshire Police and Crime Commissioner Philip Seccombe said: “I have been able to support a wide mix of initiatives, with projects large and small reaching every corner of the county.  Delivered by community, third sector and statutory organisations, each funded project will help to address the priorities of my Police and Crime Plan and ultimately make a big contribution to making Warwickshire safer and more secure.

“I have been impressed by the quality of the schemes we are supporting, as well as the dedication of all those involved with supporting victims and working with local communities to reduce crime.  I’m delighted to be able to give this financial support and I look forward to seeing positive results across the rest of this year.”

All funded programmes are required to submit detailed quarterly updates to the Office of the Police and Crime Commissioner to ensure that the expected outcomes are delivered.

A full list of the supported projects can be found at: http://www.warwickshire-pcc.gov.uk/key-information/financial-information/grant-scheme/