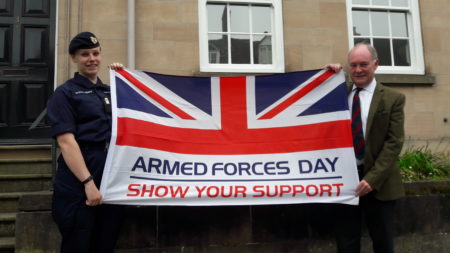 Sergeant Vicki Duffield-Smith from Warwickshire Police, who is also a Royal Navy Reservist, with Police and Crime Commissioner Philip Seccombe.

Warwickshire Police and Crime Commissioner Philip Seccombe has welcomed the Armed Forces Day flag to his offices today, as it tours the county ahead of being presented at police headquarters on Saturday.

Armed Forces Day (June 29) is an opportunity to show our support for the men and women who make up the Armed Forces community – from currently serving troops to service families, reservists, veterans and cadets.

The stop off at the PCC’s offices was particularly timely as today (June 26) is Reserve Forces Day – a subject close to Mr Seccombe’s heart, as he is also the volunteer chair of the West Midlands Reserve Forces’ and Cadets’ Association, alongside his role as commissioner.

He said: “Armed Forces Day gives us the opportunity to celebrate the amazing work our service personnel, veterans, cadets and their families do. That also includes all those who volunteer as part of the British Reserve Forces.

“I am pleased Warwickshire Police remains committed to its Reservist Policy, allowing officers and police staff to join reserve forces if they want to do so.

“Strong reserve forces are a vital element in the protection of our national security, while the additional skills that reservists bring back to Warwickshire Police is something that the wider community here in the county can benefit from on a daily basis.”