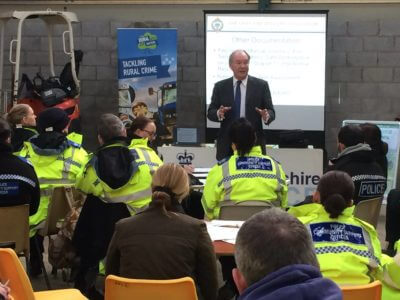 Warwickshire Police and Crime Commissioner Philip Seccombe says that combating rural crime remains a key priority for his office and Warwickshire Police, as new figures released by NFU Mutual reveal that claims for crime in rural parts of the county amounted to £840,000 in 2016.

The insurer’s annual Rural Crime Report, published today, showed an increase in claims of around 13% over 2015, with the most commonly targeted items by thieves in Warwickshire being tools, garden equipment, ATVs (all-terrain vehicles) and quad bikes.  Nationally, NFU Mutual also reports that claims have further increased in the first half of 2017.

Responding to the report, Mr Seccombe said:  “While the figures from NFU Mutual are only one indicator and can sometimes be skewed by a small number of high-value claims, they nevertheless do show the significant impact that crime has in rural areas.  This remains a concern for rural businesses and residents and it’s why I have made tackling rural crime a key part of my Police and Crime Plan.

“Over the last 12 months I have funded a wide range of initiatives designed to enhance how the police deal with rural crime.  This has included specialist training for our Safer Neighbourhood Teams in identifying stolen agricultural and plant machinery, information on livestock theft and identifying forensic opportunities to catch offenders when crimes do occur.  In addition, the county now benefits from new Wildlife Crime Officers, who can help ensure specialist knowledge is available to their colleagues when tackling some of the crimes which cause concern among the agricultural community, such as coursing.

“I also fund a team of Rural Crime Co-ordinators, who work closely with partners such as NFU Mutual, local councils and community groups to help people improve their security and also increase the opportunities the police have to gather evidence to bring offenders to justice. Only recently farm vehicles fitted with tracking devices have been deployed to a number of locations in rural areas of South Warwickshire to help locate ‘would be thieves’, with a number of arrests following.

“Overall, I want to get across the message that crime in rural parts of our county will not be tolerated. It’s important that crime is taken just as seriously in rural areas as urban parts of the country and I will continue to push to ensure that rural forces like Warwickshire Police receive a fairer slice of national police funding to be able to tackle it effectively.”

You can find out more about protecting yourself from rural crime by joining the PCC-funded Warwickshire Rural Watch scheme at www.warwickshireruralwatch.co.uk.