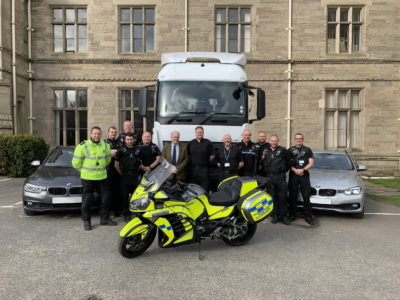 Warwickshire Police and Crime Commissioner Philip Seccombe is pictured with members of the Commercial Vehicle Unit and the Highways England ‘Supercab’ at Police Headquarters earlier this year.

The report by Her Majesty’s Inspectorate of Constabulary and Fire & Rescue Services (HMICFRS), titled ‘Roads Policing: not optional’, was published today and makes a number of recommendations for how police and other partners can work together more closely to boost the effectiveness of roads policing and the visibility of road safety campaigns.

Mr Seccombe said: “I welcome the additional focus on road safety that Her Majesty’s Inspectorate is calling for. Despite hard work by many agencies over a sustained period of time, it remains the case that you are far more likely to be killed or seriously injured as a result of a collision on our roads than you are from any form of crime. This is why reducing these numbers has been a strategic priority from day one of my Police and Crime Plan and I fully endorse the need for continued improvement.

“A national strategy that makes it clear the responsibilities each agency has to contribute towards improved road safety and which provides greater co-ordination and funding of activity would be very helpful.  It would build on the successful partnership working we have established here in Warwickshire.

“I also fully agree with the Inspectorate that any surplus generated by efficiency savings forces make through the delivery of speed awareness courses should be used to fund road safety initiatives. My office has led the way on this through the establishment of the Warwickshire Road Safety Fund. Over the past year this has provided more than £600,000 for a range of targeted education and enforcement initiatives, aimed at some of our most vulnerable road users. This is a template which other areas across the country should be encouraged to follow.

“My ambition is for Warwickshire to lead the way nationally on road safety and, while the inspectors did not visit Warwickshire Police, many of the recommendations and good practice suggestions are already being carried out here. This is encouraging.

“For example, the Commercial Vehicle Unit I fund leads the way regionally and nationally on Operation Tramline, with extremely close collaboration with Highways England. It has recently been recognised for its continued good work during the Covid-19 pandemic by the Road Haulage Association.

“Enhancing the local co-ordination of the agencies working together to improve road safety is also critical and in recent months I have been keen to re-energise this work in Warwickshire. I now chair the Warwickshire Road Safety Partnership and my office has taken a lead in pushing forward the road safety agenda, with a focus on evidence-led projects that are based on careful analysis of roads policing intelligence and collision data.

“Overall, across the last 18 months there has been considerable progress as Warwickshire Police has also re-established its own roads policing capability following the end of the strategic alliance, with increased numbers of officers being deployed. The number of people killed on our roads has reduced, with eight fewer deaths in 2019/20 compared to the previous year, but that has still resulted in 28 people losing their lives and many more suffering serious injuries. It is clear there is still much work to do.

“I will discuss the findings of the report with the Chief Constable and our road safety partners in Warwickshire to ensure that we continue to build on the momentum we have established locally to make a real difference and reduce the human cost of collisions on our roads.”