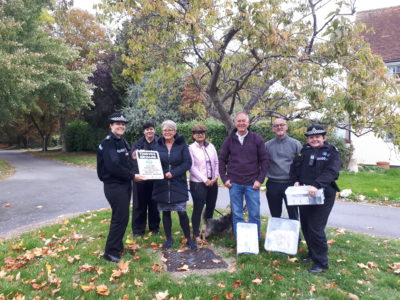 Working with the Bourton Trust, the villages of Draycote and Bourton have become the latest rural communities in the north of the county to join a crime prevention initiative funded by the Warwickshire Police and Crime Commissioner, Philip Seccombe.

By gaining ‘Supported Village’ status, villagers are demonstrating that their community is not a soft touch for rural crime, with households being offered advice on how to protect themselves against crime and working with local officers to mark their property.

The Supported Villages programme, part of the Rural Crime Project, aims to help communities with proactive crime prevention action and advice, providing a sustainable scheme which can then be maintained by the community.

A property marking evening was held where villagers were invited to bring items to be marked and get crime prevention advice. ‘Thieves Beware’ signs are also now at both village gateways stating that you are entering a village where property is marked.

To mark the new ‘Supported Village’ status, both villages were presented with a crime prevention toolbox and a community box by Inspector Karen Jones and Sgt Sarah Masters from Warwickshire Police. Both boxes provide information and equipment for the nominated village contacts (Tony Mather in Draycote and Robert Jack in Bourton) to support local residents with further property marking and crime prevention in the future.

Warwickshire Police and Crime Commissioner Philip Seccombe said: “Communities can play a major part in the fight against crime by ensuring they take sensible precautions to protect their valuables and ensure that everyone knows that the village as a whole is security conscious and working together with the local police to deter criminal activity. I’m delighted to see Bourton and Draycote as the latest additions to this successful initiative.”

Ann Morton from the Bourton Trust added: “I would like to thank Warwickshire Police, in particular Carol Cotterill, and Police and Crime Commissioner Philip Seccombe for all their help and support in getting the two villages involved in such a worthwhile scheme.

“Following a few burglaries in the village at the beginning of this year it made us a lot more aware of our property and how vigilant and careful we should all be. This is a great initiative and I hope it is well supported by the villagers of Bourton and Draycote.”