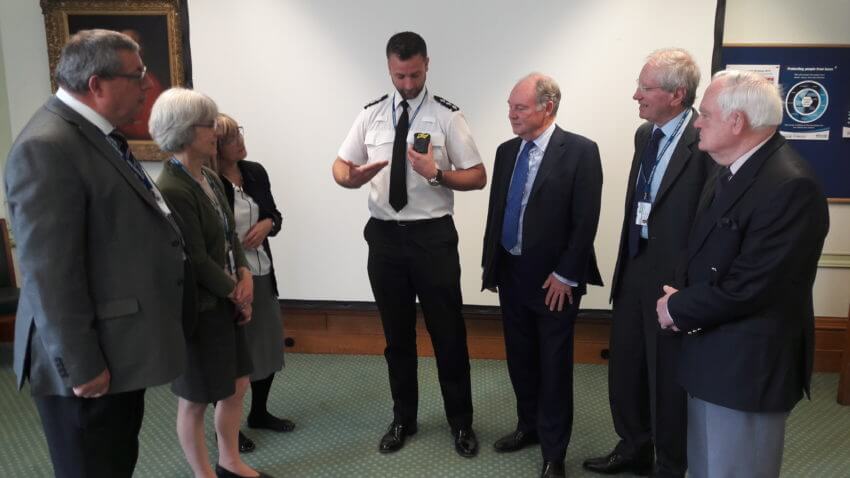 New body worn video equipment which will used by frontline police across Warwickshire from later this year has been scrutinised by the Police and Crime Commissioners’ Trust, Integrity and Ethics Committee.

The committee – jointly set up by Warwickshire PCC Philip Seccombe and his West Mercia counterpart John Campion – had the chance to quiz operational policing leads for the project, as well as studying the new force policies which will be followed by officers when they receive their new equipment over the summer months.

Firearms and Taser-trained officers will be among the first to receive the equipment in Warwickshire, followed by patrol officers, with all front-line operational officers – including those in Safer Neighbourhood Teams – gaining body-worn cameras during the remainder of 2017.

Officers in the West Mercia Police area are being similarly equipped, following the joint approval by Mr Seccombe and Mr Campion of the business case across the policing alliance last December.  The initial purchase cost for the rollout across the two forces is around £1 million.

Warwickshire Police and Crime Commissioner Philip Seccombe said:  “I think it was important for the Trust, Integrity and Ethics Committee to look at body worn video, as they are very much our ‘conscience’ on the public’s behalf when it comes to ethical matters.  The committee had a good a demonstration of the equipment from officers, so that members could fully understand how it will be used and were then able to ask appropriate questions of the force, ensuring they were happy with the policies and procedures frontline officers will be using.

“Body worn video has already been rolled out in some forces across the country, most notably the Metropolitan Police, and it has proved a great success.  I think it will similarly be welcomed here by the public and by police officers alike. The roll out this summer across Warwickshire will help to produce high-quality evidence to assist police in making prosecutions and will also be of assistance in the police complaints system, allowing everyone to have an accurate record of what happened and who did what in an incident.”

He added: “Importantly, I think it will also help to improve officer safety, as the evidence from elsewhere suggests that the use of body worn video can help to defuse confrontational situations, as people modify their behaviour when they know they are being filmed.”

The TIE Committee meets four times a year and is comprised of independent members from across the Warwickshire and West Mercia.  Meetings take place alternately in each force area.

The next meeting will take place on 19 July 2017 at West Mercia Police Headquarters, Hindlip, Worcester, at 1.30pm.  Committee meetings are open to any member of the public to attend (excluding closed sessions).

For more information about the work of the TIE Committee, visit: www.warwickshire-pcc.gov.uk/your-pcc/trust-integrity-and-ethics/