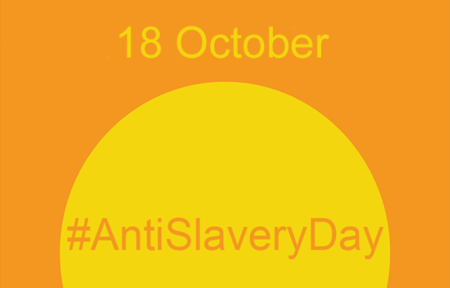 This weekend Warwickshire Police will be supporting Anti-Slavery Day to help raise awareness of modern slavery and human trafficking.

Modern slavery is a form of organised crime in which people are treated as commodities and exploited for criminal gain, while human trafficking is the process of moving people through the use of force, fraud, violence, deception or coercion with the aim of exploiting them.

Modern slavery and human trafficking are an international problem in which victims may have entered the United Kingdom illegally, on forged documentation, or they may be British citizens living in the United Kingdom where they are exploited. They could be exploited in a number of ways such as sexual exploitation, forced labour, domestic servitude, forced criminal activity, sham marriages or even organ removal.

Vulnerability and Safeguarding Lead for Warwickshire Police, Detective Superintendent Pete Hill said: “Police and partners play a vital role in tackling these crimes and it’s important that we are educating our officers on how to recognise the signs. We have recently trained an additional ten ‘Modern Slavery Specialist Investigators’ within our force and plan to train a further 15 in December.

“We are also in the process of training a number of frontline officers as Modern Slavery Victim Liaison Officers so that we as a force, are able to provide a more effective initial response to incidents involving victims of modern slavery.

“In addition to this, we continue to work closely with our partners to ensure that any victims identified in Warwickshire are given the best possible support.

“Modern slavery is happening across the country and that includes Warwickshire, and it is therefore really important that members of the public know what to look out for as this could be happening in your workplace or community.

“People who look malnourished, show signs of physical restraint, or who may live in dirty or crowded accommodation, working long hours for little or no money, could be signs that someone might be being exploited. They may be exploited in factories and farms, in restaurants and domestic servitude, or forced to commit crime or be sexually exploited.

“If you or someone you know may be being exploited I would urge you to get in touch either via our website or by calling 101. Always call 999 in an emergency. You can also call the Modern Slavery helpline on 0800 0121 700 or visit www.modernslaveryhelpline.org for more information.”

Warwickshire Police and Crime Commissioner Philip Seccombe added: “It’s important that everyone recognises that modern slavery and human trafficking are happening in Warwickshire and I welcome the additional training that officers are receiving to help them spot the signs and bring offenders to justice. Investigating the criminal gangs responsible for these offences is often a complex process and it is important that Warwickshire Police continues to expand its capabilities and works closely with partners to end these appalling crimes.

“Victims may have been subject to years of abuse and often have complex needs, so it is vitally important that they receive high quality wrap-around support when offences come to light. The new Victim Liaison Officers will mark a significant step forward in ensuring that tailored support which will help continue to protect victims from harm.

“I’d also like to highlight that everyone in the county can also help to end exploitation by being alert to how it manifests itself in our communities and reporting their concerns or suspicions, safe in the knowledge that the police do take every report seriously.”

To find out how to spot the signs of modern slavery and human trafficking, visit: www.unseenuk.org/modern-slavery/spot-the-signs