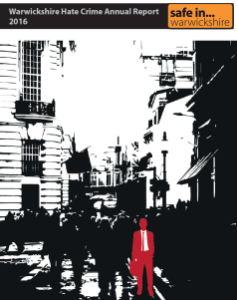 A report detailing levels of hate crime in Warwickshire and the actions taken by police and partners to tackle it has been published for the first time, as part of National Hate Crime Awareness Week (8-15 October).

Produced by the by the multi-agency Safer Warwickshire Partnership Board, the Hate Crime Annual Report examines data from a wide range of sources, including police crime figures, court statistics and information collected from schools, as well as summarising progress against the county-wide action plan.

The report reveals that during 2015/16 there were 498 recorded hate crimes across the county, representing 1.6% of all crime in Warwickshire.  Of these, a total of 63% were religiously or racially motivated, with a small proportion (9%) resulting in physical harm or assault.  Warwickshire schools also reported 90 hate incidents to the local authority, the majority of which related to derogatory name calling.

The statistics, which are collated up to March 2016, build on previous research carried out in 2014 by Birmingham University, which estimated that hate crime in the county is significantly under-reported, by perhaps as much as 50%.

Since that study, public and third sector partners across Warwickshire have developed a partnership action plan to prevent hate crime in the county, increase reporting and improve the response and support available for victims. The action plan is delivered by the multi-agency County Hate Crime Group which reports to the Safer Warwickshire Partnership Board.

Achievements against the action plan highlighted in the annual report include the establishment of Hate Incident Partnerships (HIPs) – made up of third sector representatives, supported by the statutory authorities – in the north and south of the county, which review local cases and trends and task partners as appropriate; the creation of a new hate-crime learning package and the development of new campaigns and marketing materials, aimed at encouraging all parts of society to play their part in tackling hate crime.

Warwickshire Police and Crime Commissioner Philip Seccombe: “The Hate Crime Annual Report gives for the first time a real snapshot of the issues around hate crime in Warwickshire and shows the progress that has been made in encouraging more people to come forward and report incidents, as well as identifying areas where more work needs to be carried out.

“While hate crime remains a small proportion of crime overall, we know that it remains significantly under-reported and recent national and international events – including ‘Brexit’ – have given even greater reason to focus on the issue. Supporting the county-wide action plan to tackle hate crime is one of the key objectives in my Police and Crime Plan and I know it is equally important for all community safety partners in the county.”

He added: “The annual report’s launch during Hate Crime Awareness Week can only help reinforce the message that everyone has a responsibility to stand up to hate crime.” 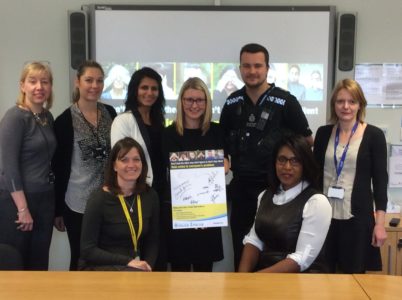 Pledges being signed at the Countrywide Hate Crime Group.

The annual report was circulated at this week’s meeting of the County Hate Crime Group, where members signed pledge boards as part of the Hate Crime Awareness Week initiative to encourage everyone to play their part in speaking up for victims and speaking out against hate crime whenever they see it occur.

Councillor John Horner Warwickshire County Council’s cabinet member for community safety, added:  “This week’s events are not just about targeting people who are more likely to be victims of hate crime. Hate crime is everyone’s problem and we all have a part to play in tackling it.

“The more people who pledge to tackle it, the more the people who commit these offences will understand that it will not be tolerated in Warwickshire and more victims will have the confidence to come forward.”

You can report a hate crime in confidence in any of the following ways:

The Warwickshire Hate Crime Annual Report can be found at https://safeinwarwickshire.com/hatecrime/