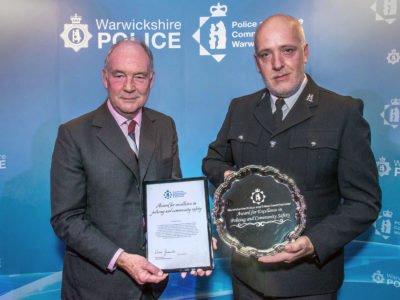 Completely in his own time, PC Croshaw has produced numerous short videos of topics from serious and organised crime to health and wellbeing, hate crime, child sexual exploitation, domestic abuse and volunteering. His work has raised awareness in many ways for members of the public to better understand and recognise vulnerabilities in our communities, especially those linked to organised crime.

One example has seen PC Croshaw working with a local 16-year-old Anti-Hate rap artist, creating a You Tube video to highlight the issue of county lines drug dealing. This is a serious national problem involving drug gangs and Stephen’s video has received wide acclaim, including an endorsement from the National Crime Agency.

PC Croshaw has also previously worked closely with crime and disorder partners and created videos for the ‘Love Instead of Hate’ and ‘Hate Crime FREE-style’ projects. Several of his other videos have been adopted by Warwickshire Police for training purposes, for example his work on problem solving and how it can lead to reductions in crime and anti-social behaviour.

Speaking at the awards event at the Spa Centre, Warwickshire Police and Crime Commissioner Philip Seccombe said: “Engagement and integrated partnership working are vital to increasing visibility in local communities, engaging with the public and putting problem solving at the heart of what Warwickshire Police does. To that end, Stephen has excelled in this approach and his dedication and contribution has gone well above and beyond what is expected of his normal day-to-day responsibilities.

“I am particularly taken by the way in which he has involved local young people in the production of many of the videos, helping to ensure that they are tailored in a way which will get their very important messages across in an easy to understand but thought-provoking way.

“Stephen shows no signs of stopping any time soon and indeed his latest series of videos features the Nuneaton & Bedworth Safer Neighbourhood Team explaining some simple tips for having a safe and enjoyable festive season. I do encourage you all to look out for his

You can see an example of the videos at: 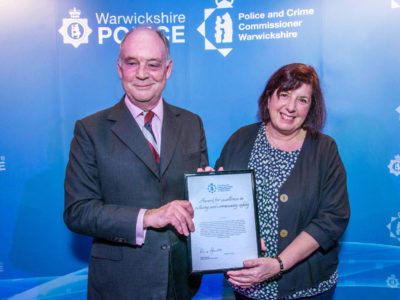 The PCC’s award was first introduced in 2017 to recognise teams or individuals from within policing or the wider community who make a real difference to Warwickshire. It is aimed at rewarding those who regularly go above and beyond what is expected in their day-to-day role over a sustained period of time, often in challenging circumstances.

For the first time this year two further ‘highly commended’ awards were made also made by the Commissioner, due to the high quality of nominations received.

Ann Johnson, who until recently led the Stratford Link project for rough sleepers, the street community and the socially excluded in Stratford-upon-Avon, was recognised for her dedication in helping people who often lead complex and chaotic lives, with individual health needs and sometimes challenging behaviour. While the Link project itself is currently undergoing a strategic review, the contribution that Ann has made over the past few years continues to be felt. 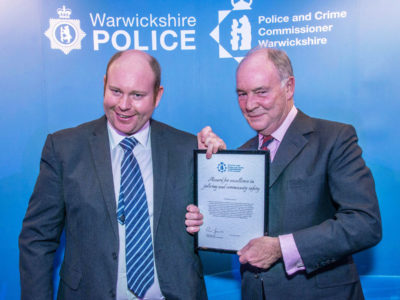 Christopher Langman was also highly commended for his voluntary work at Henley Community Library, where he gives his time freely to give people advice and information about staying safe online. He was also nominated for a second time for his work developing a set of easy read guides for Warwickshire Police, Stratford-on-Avon District Council and other partners, to help people with learning difficulties understand how to access key services and also how to stay safe. Christopher is a key supporter of the multi-agency initiatives to tackle hate crime in the county and was also recently one of the ‘faces’ of a Warwickshire Police hate crime awareness initiative.

A total of 14 suggestions of worthy winners were received this year from the public, partner agencies and from within Warwickshire Police itself, with a high standard across the board. The Commissioner will now consider with the force other suitable forms of recognition for the remainder of the nominees.