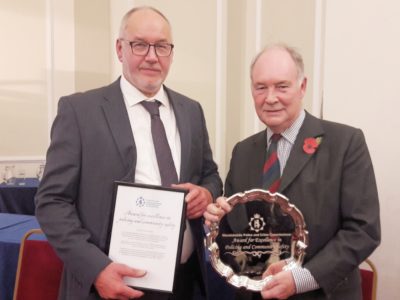 The winner of the 2018 Warwickshire Police and Crime Commissioner Award for Excellence in Policing and Community Safety has been revealed as Robin Bunyard.

Announced by Commissioner Philip Seccombe as part of the annual Chief Constable’s Commendations evening in Leamington Spa, the award recognises Robin’s work assisting the police with vehicle recovery from his business premises in Rugby.

For more than 25 years he has worked with a wide range of functions in the force providing facilities, support and guidance in all matters vehicle-related, being principally responsible for the recovery of vehicles which are involved in police investigations and following road traffic collisions on behalf of the force.

Over and above this he supplies Warwickshire Police with vehicle examination facilities at no cost, as well as giving disposal vehicles for free, which the force uses for officer training exercises.  He has also been an ever-present fixture at open days and other events organised by Warwickshire Police, providing vehicle recovery displays and public demonstrations simply for the enjoyment of passing on his knowledge and enthusiasm.

This close association with the police has come at some personal cost, including a devastating arson attack on his business premises 10 years ago which was in reprisal for the work he conducts for the force.

Announcing the award winner, Warwickshire Police and Crime Commissioner Philip Seccombe said: “Robin has a welcoming demeanour which puts people at ease and this is recognised by officers and police staff who visit his premises to fulfil policing tasks, some of which can be unpleasant, such as the examination of vehicles after fatal road collisions.  Robin is also a font of knowledge and advice for the public who visit his premises, guiding them in the ‘what next’ steps to take following a road traffic collision and on document production at police front counters.

“This public-spiritedness has come at some personal cost to Robin and his family, who have seen some very trying times over the years, including receiving threats and intimidation while conducting police vehicle removals.  Ten years ago his business suffered a very traumatic arson attack as a reprisal for its involvement with the police, which required a complete relocation while the premises were rebuilt at substantial personal cost.

“Despite all of this, whatever has been asked of Robin and his business, he has worked tirelessly to provide,” added Mr Seccombe. “As he now starts partial retirement, it seems a fitting time to recognise Robin’s many achievements, so it gives me great pleasure to announce him as the 2018 Award for Excellence in Policing and Community Safety.”

The award was introduced last year to recognise teams or individuals from within policing or the wider community who make a real difference to Warwickshire. It was aimed at rewarding those who regularly go above and beyond what is expected in their day-to-day role over a sustained period of time, often in challenging circumstances.

This year’s awards saw a total of 22 nominations received from the public, partner agencies and from within Warwickshire Police, with a high standard across the board.  The Commissioner will now consider with the force other suitable forms of recognition for these nominations.