Rob Tromans is confirmed as Deputy Police and Crime Commissioner 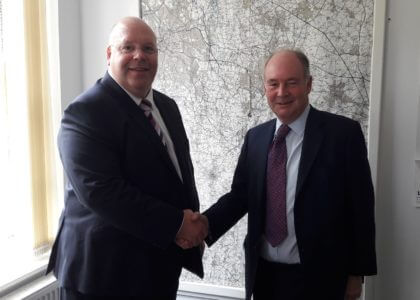 Mr Tromans, who is a councillor with Nuneaton & Bedworth Borough Council, will take up his role on 1 August, working three days a week in his new position supporting the Commissioner.

Warwickshire Police and Crime Commissioner Philip Seccombe: “I’m delighted that the Panel agreed with my assessment that Rob will make an excellent addition to my team and I look forward to beginning work with him next month. He will bring a wealth of experience from his public and business life and will be invaluable to assisting me in my role as I continue to the work to deliver a safer, more secure Warwickshire.”

Mr Tromans will continue to represent the St Nicholas ward on Nuneaton Borough Council alongside his Deputy PCC duties.  As well as carrying out engagement activity on behalf of the PCC, key pieces of work Rob will be involved with will include discussions to explore stronger collaboration between local emergency services and representing the Commissioner at the Joint Audit Committee and the Health and Wellbeing Board.

Commenting on his appointment, Rob said: “I have always taken a keen interest in the community and the concerns of residents, so I look forward to serving local people as the Deputy Police and Crime Commissioner for Warwickshire. By supporting our excellent Commissioner, Philip Seccombe, and working closely with Warwickshire Police, I am committed to helping make our county a safer place to live, work and raise a family.”

Rob Tromans is 49 years old and lives in Nuneaton with his wife and teenage son.

He first moved to the north of the county as a child and attended Higham Lane School and North Warwickshire College, in Nuneaton. After a spell living in Worcestershire, Rob returned to Nuneaton to marry, have a family and later start up a successful small business.

In addition to running a specialist consultancy firm, Rob has always made time be involved with his community.  He has spent many years volunteering and contributing to a wide range of activities, from helping local campaigns, raising petitions and organising community litter picks, through to serving for some years as an LEA-appointed and then academy school governor.

An enthusiastic cook, Rob also enjoys going to the gym and rugby. Rob’s love of rugby started a when he played for his school and in later years turned to volunteering in youth sport where he has variously been a team manager, coach and first aider for the Mini & Juniors section of a local rugby club.

As someone who is community-minded and likes to be busy meeting people, Rob was elected to his local council, where he serves on the Audit, Planning and Standards committees.  During his time on the council, Rob has helped build a consensus around doing more to secure play parks and public open spaces. He has also pressed for a consistent approach to the problems of unauthorised encampments.

As a local Councillor, Rob meets regularly with residents’ groups, including those formed to meet licensed premises conditions.

Public safety is also a concern to Rob and as part of community resilience initiative, he joined the team that lead the development of disaster response plans for the local area.

Rob has also been meeting regularly with the police Safer Neighbourhoods Team, with a particular focus on local ASB, burglary and car crime. In addition, Rob is a member of Community Speed Watch, an initiative where residents receive training to use police speed monitoring equipment, so that warning notices can be issued, by the police, to motorists caught breaking the speed limit.