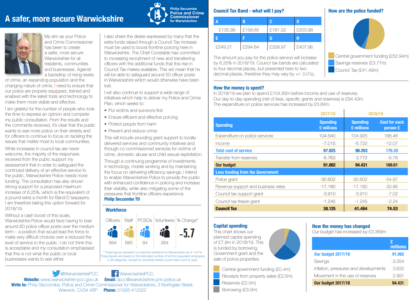 Across Warwickshire, districts and boroughs are sending out their annual Council Tax notices, which give information on the charges that local authorities, fire authorities and the police are making for the provision of services in the county.

This page is intended to give an overview of how the police precept works, who the money raised goes to and what it will be used for.

What is Council Tax?

Council Tax is a local charge which pays towards the cost of services, including the police.  The Council Tax year runs from 1 April to 31 March and how much you pay depends on which band your house is in.  Bands are based on an assessment of the value of the property and the different levels of Council Tax are calculated as a proportion of band D.

You can check your band at: www.gov.uk/council-tax-bands.

How much will I pay for policing?

Following a public consultation, the Commissioner has decided to increase the Police Precept for 2018/19 by 6.25%.  This is equivalent to a 22 pence per week increase on an average Band D property.

The table below outlines what the changes will be for each Council Tax band in Warwickshire from April 1, 2018:

The police receive funding from three main sources: Council Tax (through the Police Precept), grants from Central Government and reserves (money put aside for future use on a one-off basis).  Some additional funding may also be raised through borrowing for capital projects. 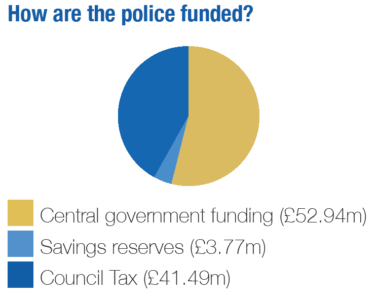 This year, the amount of funding received from Central Government for policing was kept at the same level in real terms as 2017/18, although additional money was also provided for counter terrorism and national policing priorities.

In Warwickshire, when taking into account inflation, other increases in costs and despite continued efficiency savings, on its own this ‘flat cash’ settlement would not be sufficient to maintain the levels of service the public expects, while also allowing for continued modernisation of the force to meet the changing nature and increasing volume of crime.

To address this budget shortfall, Police and Crime Commissioners have been given additional freedom this year to make increases on the amount raised through the Police Precept, up to a maximum of £12 per year on an average Band D property.  Anything beyond this would require a public referendum.

The Commissioner ran a consultation to ascertain the levels of public support for increases of £8, £10 or £12 per year on a Band D property, before setting the final level.  More than 70 percent of Warwickshire residents who responded to the survey indicated they were supportive of the maximum increase of 6.25%, with 7.3% in favour of a 5.21% increase and 14% in favour of the lowest proposed increase of 4.17%. A further 7.9% of respondents said they would prefer not to see any increase.

Following the consultation, the Commissioner announced that he would be increasing the Police Precept by the maximum amount, which equates to an overall increase of 6.25%.  The precept for 2018/19 will raise approximately £ 41.8 million – around 42% of the net funding for Warwickshire Police.

Without the maximum increase to the precept, Warwickshire Police would have faced having to lose around 60 police officer posts over the medium term – a position that would have left it needing to make very difficult choices over a reduced level of service to the public.  The Commissioner did not think this would be acceptable to the public, hence the decision to increase the precept.

Does this apply to the whole of my Council Tax bill?

No, the 6.25% increase is only applied to the Police Precept element, which is a relatively small proportion of the overall bill.  The other billing authorities (county district, borough and parish councils together with the County Council Fire Authority) have their own arrangements for deciding the level of their elements of the final Council Tax bill.

How will the money be spent on policing? 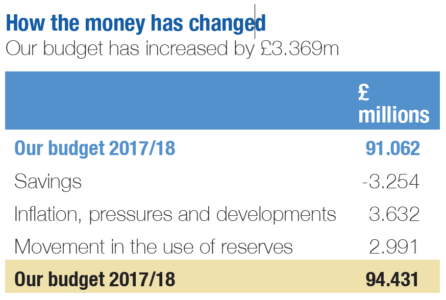 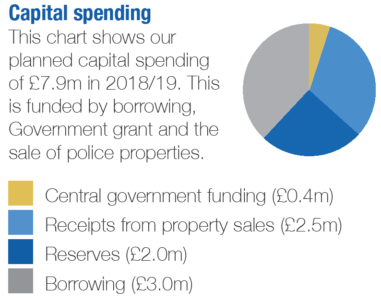 What will the 6.25% precept increase be used for?

The Commissioner has stated that the increased money generated by the precept rise must be must be used to boost frontline policing here in Warwickshire.  The Chief Constable has committed to increasing recruitment of new and transferring officers with the additional funds that this rise in Council Tax makes available.  This will mean that he will be able to safeguard around 50 officer posts in Warwickshire which would otherwise have been lost.

What has the Chief Constable said about the increased funding? 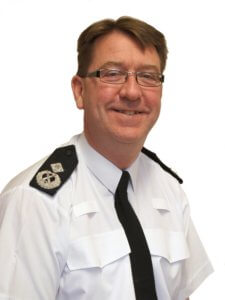 Warwickshire Police Chief Constable Martin Jelley said: “I recognise that this extra funding will not resolve all our longer term financial challenges and we will need to continue to seek to be as effective and efficient as we can. This is, however, a very welcome increase in funding which will allow me to reinvest in Operational Policing, securing around 50 police constable posts which would otherwise have been impossible.

“This will be achieved by increasing the number of constable recruitment intakes we had planned and by opening up to accept some transferees from other forces. While these posts will not appear overnight, they will filter through as the year progresses and will be very welcome additions to Warwickshire Police.”

How much goes to fund the Office of the Police and Crime Commissioner?

Has the Commissioner's salary increased as a result of the Council Tax rise?

No, the Commissioner’s salary has not increased and has in fact remained the same since the post was created in 2012.

Police and Crime Commissioner salaries are set by the Home Secretary, following advice from the Senior Salaries Review Board (SSRB).  In 2011, the SSRB made recommendations, accepted by the government, that the pay of PCCs should be between £65,000 and £100,000 and be broadly linked to the size and complexity of the respective police force.   The SSRB has made no recommendations to alter the salary of Police and Crime Commissioners in the intervening years.

As Warwickshire is among the smallest police forces in England and Wales, this means that the Commissioner’s salary is set at £65,000 per annum.

Where can I find out more?

A downloadable copy of information relating to the Police Precept can be found here:
2018/19 Council Tax leaflet

You can also read the full Budget Report 2018/19 and Medium Term Financial Plan.

Further information about finance can be found on our Financial Information page.